Sweden needs defense against external threats, but that requires not only aircraft and cannons, but also a much better cyber defense than we have today.

Sweden needs defense against external threats, but that requires not only aircraft and cannons, but also a much better cyber defense than we have today. We want to work for international conventions that regulate cyberwarfare, and limit the damage that such can inflict on civilians. We believe that voluntary organizations should play an important role in defence.

Overview – The Pirate Party wants to:

Introduction – The mission of the Armed Forces 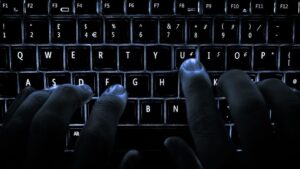 The mission of the Swedish Armed Forces must be to create such conditions for an attack on Sweden that other military actors consider that they have more to gain by leaving Sweden out of a conflict than by drawing Sweden into it. Furthermore, the mission must be to, if an attack does occur, repel it if possible, and otherwise wage a protracted resistance struggle with the aim of inflicting heavy losses and having time to receive help from elsewhere.

The Pirate Party’s program of principles states that the party wants to protect the foundations of democracy, the integrity of individuals and create protection from abuse by various power holders on the individual. This means that Sweden as a state and society needs the opportunity to protect its territory, its infrastructure and its citizens from attacks by other military actors – states or non-states. An important part of such a defense is that Sweden has a functioning, modern and adapted defense force with the resources required for its mission.

§1 At least two percent of the defense budget is spent on research;

§2 Sweden works for strengthened defense cooperation within the EU.

2. Transparency and responsibility in the cyber war

Today, cyber wars are waged largely without transparency or accountability. In accordance with our principles regarding technological development and transparent exercise of power, the Pirate Party wants to change this. We want to work for international conventions that bind signatory parties to openly declare the use of cyber weapons; this includes purchasing surveillance software from third parties for the purpose of spying on foreign individuals. We also want signatories to commit not to actively undermine the security of civilian systems, for example by concealing weaknesses, in order to, for example, develop cyber weapons.

At the same time, Sweden needs to get much better at cyber defense. We believe that everyone in society needs to be involved in order for us to achieve an effective defense in Sweden. Therefore, the Piratpartiet believes that our schools should teach digital self-defense from an early age and that our authorities should undergo ongoing analyzes of their cyber defense capabilities and information security. Boards and management teams within public authorities in Sweden should have a basic knowledge of cyber security, as their operations – and our society – are largely digitized.

§3 Sweden signs an international convention on openly declaring the use of cyber weapons;

§4 Sweden signs an international convention not to actively undermine the security of civil systems.

The Pirate Party believes in a society based on actively participating citizens. Together with principles around decentralized power structures, this leads to the Pirate Party wanting to strengthen the defense forces’ cooperation with various voluntary defense organizations with the aim of strengthening Sweden’s resilience.

§5 The possibilities for greater cooperation between the armed forces and voluntary associations are investigated.

Because the Pirate Party works for transparent exercise of power and for people to have the opportunity to be informed enough to participate in the political conversation, we want to abolish the fortification agency and return all its properties to the armed forces. Today, the fortifications agency must contribute to the state treasury and provide the armed forces with requested properties. These two missions collide when certain properties are not in demand for a longer period, which leads to incidents similar to the sales of Gotland properties after the closure of the defense presence there in 2004 – sales that brought in 40 million kroner and caused the need for new purchases for 780 million kroner. In addition, when the Fortifications Agency is to make a profit, there will de facto be a hidden corresponding reduction in the defense budget, which is a problem in terms of transparency.

§6 The Fortification Agency is abolished and its assets are handed over to the Defense Forces.

The Pirate Party sees a great need for everyday life to be able to function even in times of war and crisis. For this to be possible, emergency storage of strategic products is required to meet the citizens’ needs for protection, food, heat and sanitation as well as medical care.

§7 At the municipal and regional level, Emergency Stocks are established for strategic products which, for a shorter and longer period of time, can meet the consumption of the ordinary business;

§8 State-owned companies and authorities are required to reserve supplies that are of utmost importance for their operations and production.

Administrative policy is about the design of the administrative structures that will transform decided policy into reality.
Culture

Our culture is increasingly becoming digital. Our possibilities to create, share and develop art could be endless.
Defence policy

Sweden needs defense against external threats, but that requires not only aircraft and cannons, but also a much better cyber defense than we have today.
Democracy

Democracy's existing tools need to be strengthened and supplemented. In order to ensure that the decisions that are made are representative of the people, it requires a policy that aims to strengthen community involvement.
Drug policy

Sweden's drug policy needs to be humanized. The zero tolerance towards drugs has given us one of the highest drug-related death rates in the Western world.
Economics

Society is developing faster and faster, but at the same time, the form of the school has remained stagnant for the last hundred years.
Environment

The single-track political debate on current environmental issues is a defeat for the entire globe and has the potential to have serious consequences.
EU policy

The EU's purpose should be to make it easy to make contacts and spread knowledge and ideas within Europe and with the rest of the world.
Health care

We want equal care - regardless of whether you live in the city or in the countryside - and a diversity of different care providers. Healthcare must be evidence-based and systems improved to introduce new knowledge and new technology into healthcare.
Integrity

The pirate party wants to stop mass surveillance. Surveillance must only take place in the event of justified, concrete suspicions against particular persons.
Labour market

Technological development is advancing rapidly. It creates enormous opportunities but forces us to think along different lines than those of the 18th and 20th centuries.
Law & order

Equality before the law is one of the foundations of democracy. At the same time, it is important that police officers and prosecutors are scrutinized so that abuse is avoided and those who do are punished.
Migration policy

Sweden does not have the opportunity to help all refugees in the world, therefore we have to prioritize who we should help.
Net neutrality

The pirate party fights for a free internet, accessible to everyone. Only then can the internet be a force for freedom and democracy, giving everyone the opportunity to make their voice heard.
Sexual autonomy

The Pirate Party believes that bodily autonomy, especially regarding gender and sex-related aspects, is one of the most fundamental rights.
Dela
Em Fb Tw Li

Do you speak English or another language that you think should be added to our website? Help us make pirate policy accessible to more people!

Piratpartiet works toward an open, free and democratic society. The ability to share knowledge and culture is one of the foundations of our policies. We stand up for the rights to freedom of thought and speech, and our mission is to protect and develop these principles.

The Pirate Party was founded in 2006 to bring Sweden into the digital future. Since then we have spread to over sixty countries and developed into the world’s most successful political movement since the environmental movement in the 80s.

About us About us
Close